A Closer Look: Hasbro Crowdfunding on Shopify Plus

When we built world-famous toy retailer, Hasbro, their ultimate fan destination, a real standout feature was the Crowdfunding piece. Years later, and still one of our favorite things to have built, we’re throwing the spotlight on it.

Chances are, you’ll know at least someone obsessed with a brand in Hasbro’s portfolio of heavy-hitters — they have fanatical cult followings right across the globe. So when the brand asked us to build them a dedicated store to sell DTC, we knew it was crucial this site would inspire devotion and keep their community engaged.

From there, came HasLab. A complex crowdfunding platform we built as part of the wider store launch. HasLab invites fans to back the production of special toys the brand is proposing to manufacture — toys that require crowdfunding to justify.

These are ambitious products that can’t be green-lit within mainstream lines because the demand and return isn’t certain. But potentially producing them and leaving their fate up to Hasbro fans makes this seriously exciting stuff.

You see, HasLab projects are often moonshots. They’re not easy to greenlight. Take the mighty Unicron as an example. Here, Hasbro put forward the biggest Transformer to ever be made: a 71cm tall (no less), intricate recreation of Transformer supervillain, Unicron.

As it happened, there was more than enough interest, and the supersize Unicron went straight to production. 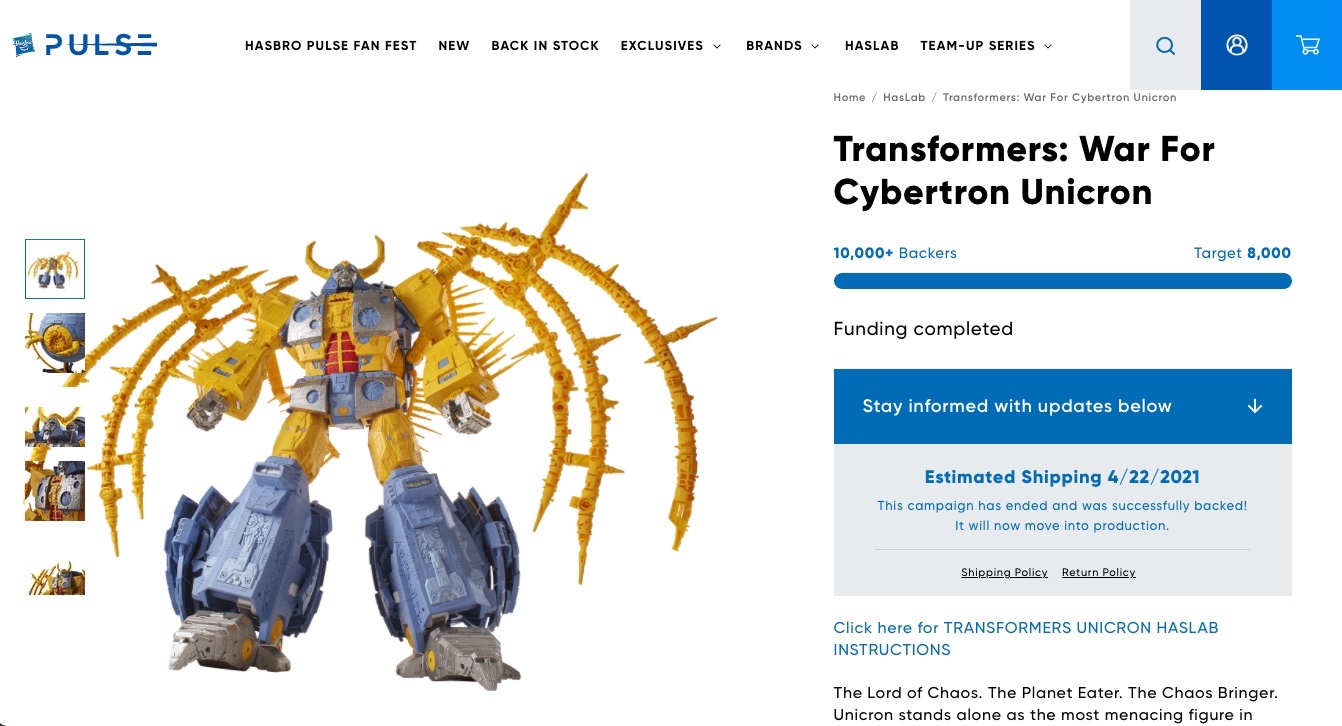 Just as there was for HeroQuest, a lavish remake of the classic 80’s/90’s board game. Quickly passing its $1,000,000 target, it’s now well underway and will soon be engaging a whole new generation of fans with fantasy miniature roleplay. 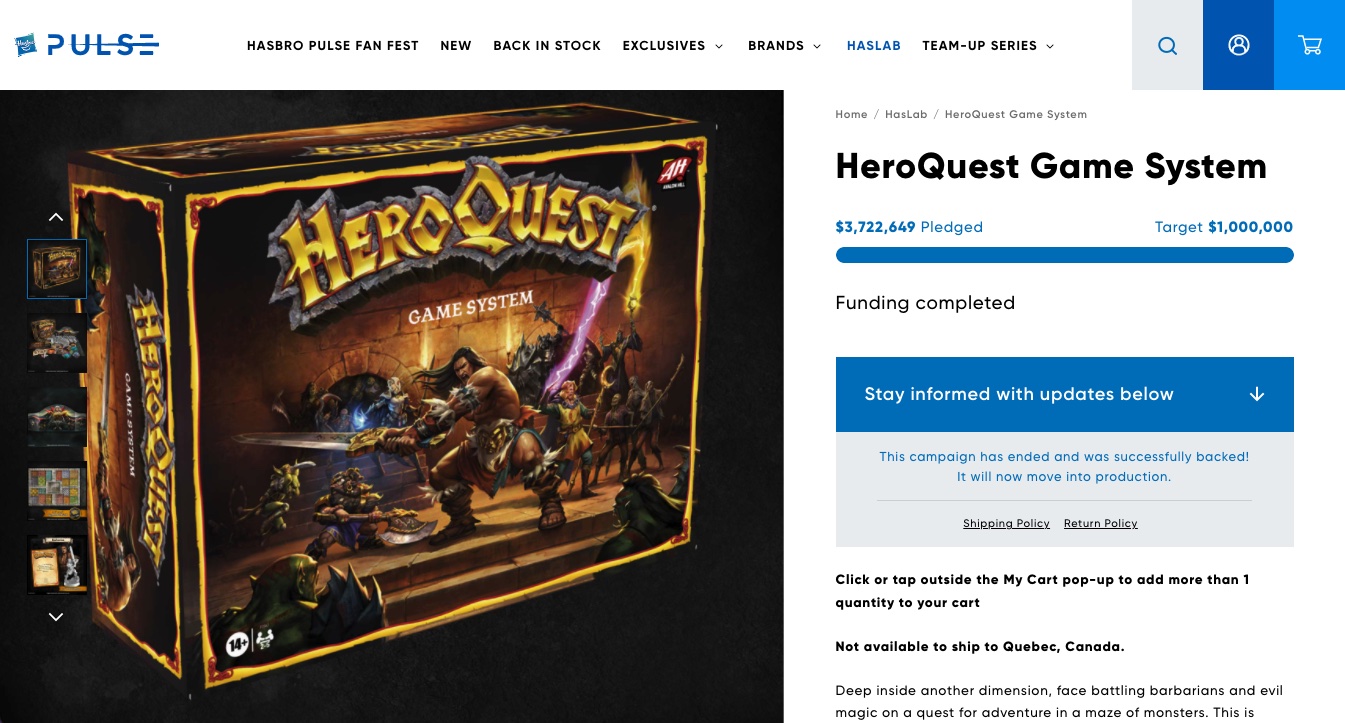 Whilst these sorts of crowdfunded projects do often generate a lot of interest, there is some risk that must be assumed by the merchant. What if the crowdfunding doesn’t work at the pace it needs to. What if it fails?

Ultimately, it’s up to the brand’s audience. If Hasbro presents the sort of thing a fan wants, they’ll back it. With Hasbro specifically, they’ll back it by pledging to buy the toy, should it go to production. And if enough people do the same, Hasbro spin it up.

Of course, when a crowdfund's successful, there can be quite a wait between pledging to buy and receiving the product (over a year in some cases). Though customers are made aware of this upon backing an item — that’s just the reality of getting crowdfunded toys produced. For the merchant, however, this does make the technicalities a challenge.

How does crowdfunding work on Shopify Plus?

An important part of the project was needing to make sure that payments would only be taken if and when a crowdfunding goal is met. To do this, we had to build a payment engine that could handle the unique logic of crowdfunding, and could keep checking and authorizing payment methods without charging customers for prolonged periods of time (if at all).

Of course, it was also important that customers would be kept informed on the crowdfunding’s progress during these periods, so extra thought went into getting this right for Hasbro (more on this in a sec).

To achieve the crowdfunding flow, we worked with our partner, Disco Labs, and built a custom payment integration system. This means that, at the Shopify Checkout, customers can enter their credit card details into a Braintree form that allows for tokenizing card information for payment to be captured later on. At this point, the customer’s credit card would only be verified — no payment would yet be authorized.

When a crowdfund succeeds...

Every crowdfunding product has a goal that must be met for the toy to go to production. If and when this happens, payments of every backer are taken and those customers receive confirmation via email.

It’s also important to set customers’ expectations at this time, for example, giving clarity within the email on what they're looking at time-wise for the product to eventually reach them.

When a crowdfund fails…

Fortunately, Hasbro is yet to see this (in fact, all of their crowdfunds so far have been hugely overfunded). But say the target isn’t met within the funding period. In this instance, all backers would be informed through an automated email that the toy won’t be going into production, and, of course, no payment would be captured.

So that’s customers, but what about inventory? Behind the scenes, crowdfunding orders can be a bit tricky to process because no inventory actually exists.

This can be particularly difficult when a customer places an order containing a ‘normal’ product for immediate dispatch, whilst also backing a crowdfunded product in that same order.

Our workaround with Hasbro was to split the order in post-processing so each sub-order could be processed in its own workflow. The crowdfunding orders sit in the back-end ERP system until they’re ready to be fulfilled — at which point, Shopify is updated with the new status. Voila.

Got a crowdfunding project in mind?

From the word go, HasLab’s been a roaring success, with many crowdfunds not only beating their targets, but beating them multiple times over (catch their past projects here). There’s no denying Hasbro has a particularly dedicated fan community, which helps, of course. But there are certainly business cases for other brands to make a real success of crowdfunding campaigns as well.

If you’re in the hype market, have sellout products, collectibles, a super-engaged fanbase, it might be something you’re already thinking about. And if you’re on Shopify Plus (or considering a move to the platform), then know our Shopify experts are always on-hand to chat about the logistics of how crowdfunding can work for you with Shopify Plus.

Alex is Co-founder at We Make Websites, the go-to Shopify agency for global commerce. We Make Websites design, develop and optimise e-commerce websites for the fastest growing brands on the planet, with teams in London and New York. Alex is an international speaker on ecommerce, brand and business growth.

Black Friday - What’s In and What’s Out?

Buy Now Pay Later: The Past, The Present And The Future

Migrating Your Magento tech stack to Shopify Plus

How to Sell Internationally with Shopify

Shopify Plus: Multi-Store vs Multi-Currency

CCPA and Shopify: What it is and How it Affects my Store

Everything you Need to Know About ADA and Shopify

Be the first to hear about what’s hot in e‑commerce and Shopify Plus. Straight to your inbox.

By providing your email, you agree for us to contact you via email with e‑commerce advice. Your data is stored securely and we never pass it on to third parties.